In this edition of Louis the Laser Guy’s podcast, “Pursue Your Passion,” Louis joins Kira to discuss her journey from aesthetician to cosmetic laser technician to studying to become a cosmetic injector!

“Hey, I’m Louis the Laser Guy, and welcome to my podcast, ‘Pursue Your Passion.’ Join me on my journey as we discover how estheticians, nurses, physicians, and complete career changers are living their passion in this booming billion-dollar medical aesthetics industry.” – Louis Silberman, Founder, and CEO of National Laser Institute 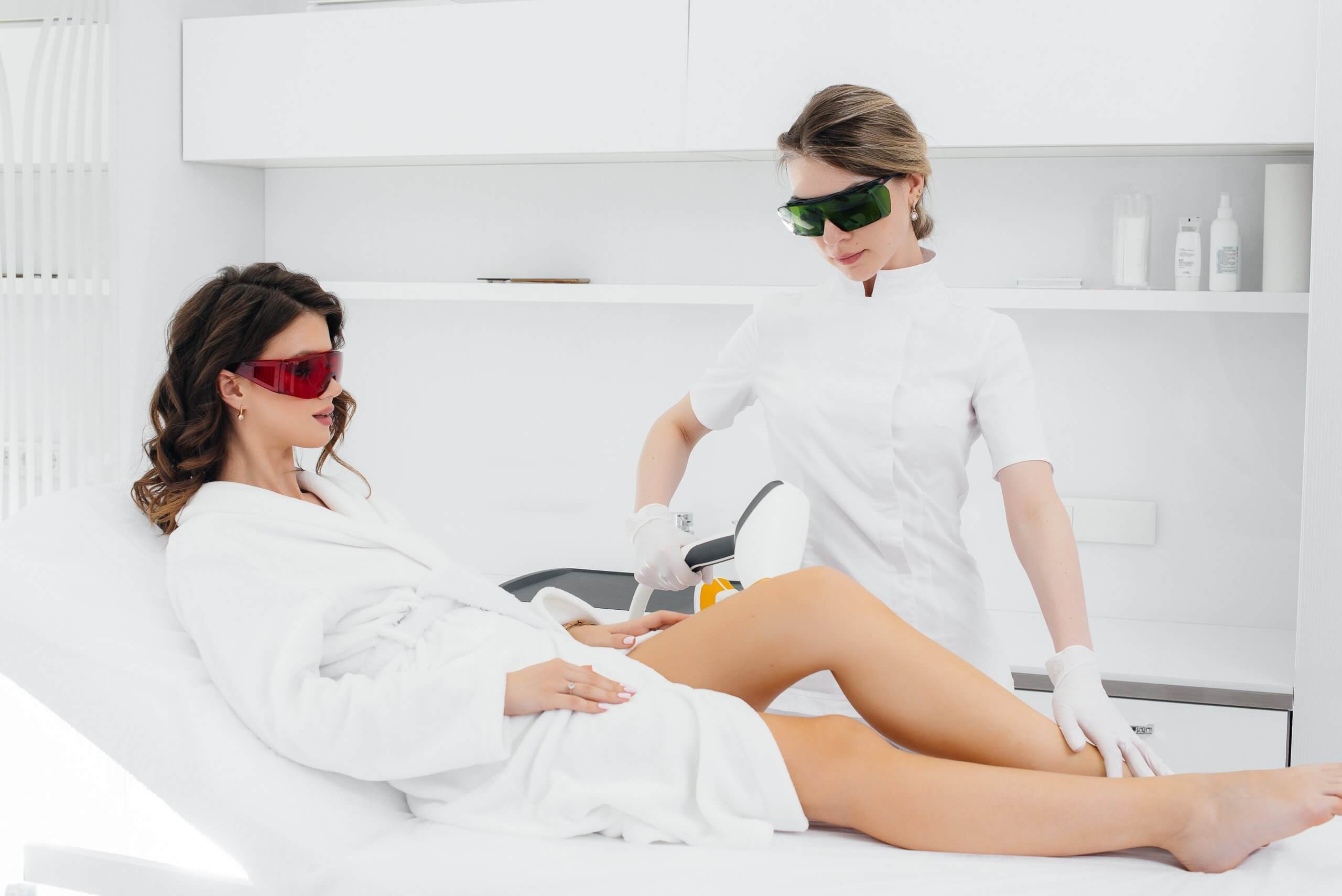 To start, Louis begins by asking Kira about what her experiences were after leaving high school. In response, Kira says that she did not want to go to college initially and decided that she wanted to work in the beauty industry. An option Kira was considering was working as a makeup artist.

Due to Kira’s love of beauty and skin, she went straight to aesthetics school following high school. Next, Kira got married and had a daughter once she turned 21. Unfortunately, Kira and her husband got a divorce at 22. In continuation, Louis says, “It is always emotional highs and lows.” In response, Kira says, “Yeah, but you learn a lot.”

Next, Louis goes back to Kira’s educational journey, asking, “Why lasers?” To provide more information, Kira says, “At the time, I was working at Mac, I was a makeup artist, so I was doing a little bit of skin here and there, but I just got to the point where I hated retail hours. I hated just the uncertainty of retail.” Following this, Kira says that she remembered hearing about aesthetic lasers when she was in beauty school but had not yet looked into the technology at the time.

To continue, Louis asks about her knowledge of lasers. In response, Kira says, “I knew laser hair removal, but I did not really know the huge broad spectrum of skin concerns lasers actually treat. So that is when started my research and found the National Laser Institute. Excitedly, Louis asks how many years ago Kira took the aesthetic laser course at National Laser Institute. Kira states, “I took it six years ago.”

Working as a Cosmetic Laser Technician

To continue, Louis says, “so you have been in business for six years and I’m sure you have done a variety of things in this crazy medical aesthetics world. What types of jobs have you had in the past six years?”

To respond, Kira says, “So when I got out of school, I just wanted to try any kind of laser that was out there. I did body contouring. This worked more with sculpting and just helping with inch loss.” To add further, Kira says, “It was all med spas for the most part. I found things I liked and I didn’t like as far as body contouring, but I knew I loved just skin. That is where I kind of found my specialty in resurfacing.”

Next, Louis says, “So when it comes to aesthetics, most people think of facial peels, but we are talking lasers…What do you think? What does that mean to you? Lasers and skin.” Kira responds passionately that cosmetic “lasers and skin is more than being able to do a treatment that is aggressive, but that you can actually see results…Also, it is not just something that makes your skin look good at the moment, this is something that is lasting.”

A World of Cosmetic Laser Technology

Out of curiosity, Louis asks Kira about CO2 cosmetic lasers, “What was your favorite one? CO2 Fractional, CO2 aggressive laser? Is that your favorite one to do for clients or for yourself?” In response, Kira says that she had, “done both. I’ve done it on myself, but I like doing it on clients.”

To follow up, Louis says, “A lot of people out there do not know what a CO2 laser is, explain to the world, what is a CO2 laser versus a Photofacial?” To shed further light, Kira says,

“A Photofacial is going after…pigmentation and redness and vascularity whereas CO2…you are going after deep lines and wrinkles. You are going after stretch marks…I have also had people not only come in for vanity reasons but people who get in car accidents and they have huge scars on their faces and they think they are stuck with it.”

Smiling, Louis replies, “and you can make the scars go away.”  Kira smiles back and says, “Yes.”

In continuation, Louis asks where Kira is currently working. Simply put, Kira replies that she works in a doctor’s office. Next, Louis asks, “and out of every ten clients you see that pop in the door, would you say like 70% are asking for hair removal before they start something different? What’s the mix of clientele?”

Kira replies, “I get everything. I have so many people who start off with doing laser hair removal and then they just hear more about different things and then they do more and more…I have clients who started off as a Groupon for laser hair removal and we have done full fractional resurfacing on them.” To gain further insight, Louis asks, “Right now, at this point in your career, are you feeling like I like medical aesthetics, I like lasers, and I can see myself doing this 20 years down the road? Or are you just seeing this as a phase of life right now?”

Kira, determined, says, “This is something that I am passionate about. I love it. But I would like to take things a step further.” Next, Louis asks what the next step is for Kira in her journey. In response, Kira says, “The next step is to get my nursing degree.” For clarification, Louis asks, “Are we talking injections like Botox? So the aesthetician turned laser tech about to turn cosmetic injector. A one-stop shop.” Smiling, Kira repeats back, “Yeah, one-stop shop.”

Furthermore, Louis asks, “So for people checking out the cosmetic laser and injection industry…who love health and beauty and they like building people’s confidence…but they are scared because it is something new…What are your words of wisdom?” In response, Kira says, “You know, if I can do it, you can do it. I know it’s so cliche to say.” Next, Kira further explains that to get where she is,

“It was just having that determination. And if this is something that, you know, interests you and it is something that’s just totally out of your element. Push yourself and you will get there.”

In addition, Kira says that “even if you don’t have kids, this is just something…it is a career that has so many aspects that you can go after depending on how hard you work and when you work hard at it.” In continuation, Louis questions, “That is the inspiration to go to the next level of cosmetic nursing, isn’t it? Is that because it seems fun to Botox and fillers because there is more income potential? Why nursing?” To clarify, Kira says,

“Everything. All of the above. All of it. Yeah, I mean, I think for me, I always feel like I hit that glass ceiling of how can I go above this? So for me, being able to be a one-stop shop, for someone being able to be that one trustworthy person that can deliver everything for them. And make a little extra money, that is never going to be a bad thing.”

To finish up, Louis says, “I love the story, because I always tell people, life is all about growing and personal development, and becoming the best version of you. So you have done the aesthetician thing. Now you are asking how can I be a better laser tech? And how can I become a cosmetic injector? You’re like go, go, go! I love that. So don’t ever stop…and whether you want to be a crazy entrepreneur like me or be a cosmetic one-stop shop nurse doing aesthetics and lasers, injections…I mean they are all amazing.”

Are you interested in becoming a graduate of the esteemed school, National Laser Institute? We are recognized as the Gold Standard in the medical aesthetics field for cosmetic injectables and laser technology. At its beginning in 2004, National Laser Institute pioneered the classroom style of both didactic and hands-on experience with real spa clients. As well as that, National Laser Institute offers comprehensive courses that cater to you. These courses range in length from one day to two weeks. Click here to get connected with one of the admissions staff today.