Have you been considering cosmetic laser training lately? It is no surprise as the medical industry is a continuously growing business. With new job opportunities every day, the marketplace is thriving. In fact, by the year 2024, skin care specialist opportunities are projected to increase by 12%.

“Hey, I’m Louis the Laser Guy, and welcome to my podcast, ‘Pursue Your Passion.’ Join me in my journey as we discover how estheticians, nurses, physicians, and complete career changers are living their passion in this booming billion-dollar medical aesthetics industry.”- Louis Silberman

To start, Hillary begins by talking about her life back in her home state, Georgia. First, Hillary states, “I moved away when I was 17 and finished high school in Albuquerque, New Mexico…I went to college at ASU.” Hillary was a good student in college, describing herself as a “brainiac.” At first, Hillary wanted to be in business. To make this happen, Hillary took marketing and communications courses in college.

Following Hillary’s college education, she started her career doing business development for a financial company. Hillary describes this job as a pure office job, stating that her typical day was, “Walk in the office, turn on my computer, be on the computer until I leave the office.” Louis says, “So it sounds like it wasn’t the dream job.” Simply put, Hillary replied, “Not a dream job, not a dream salary.”

In continuation, Louis asks, “At what point did you say, ‘I want to do something for myself or something different.’?” Hillary describes the moment she knew she was going to do something else in her life as circumstantial as she got pregnant with her first child, a daughter. Early on, in Hillary’s daughter’s life, she decided she was going to stay at home with her. Hillary goes on to state, “I had every intention of coming back.” After a while at home with her daughter, she decided that she would like to work part-time, claiming, “I don’t want to work full-time, I want to be with her.”

Hillary says that she has always been interested in aesthetics and skincare. When embarking on her search for a new career, Hillary describes wanting a flexible job. Louis says, “So you don’t want to work nine to six every single day…you want time with the baby.” Hillary agrees with Louis wholeheartedly.

Hillary knew where her interests were in looking for a new career. Then, she found a cosmetic laser training program where she would be certified in just two weeks. Louis happily replies, “So you love the short course concept….so all those things combined really sealed the deal for you.” 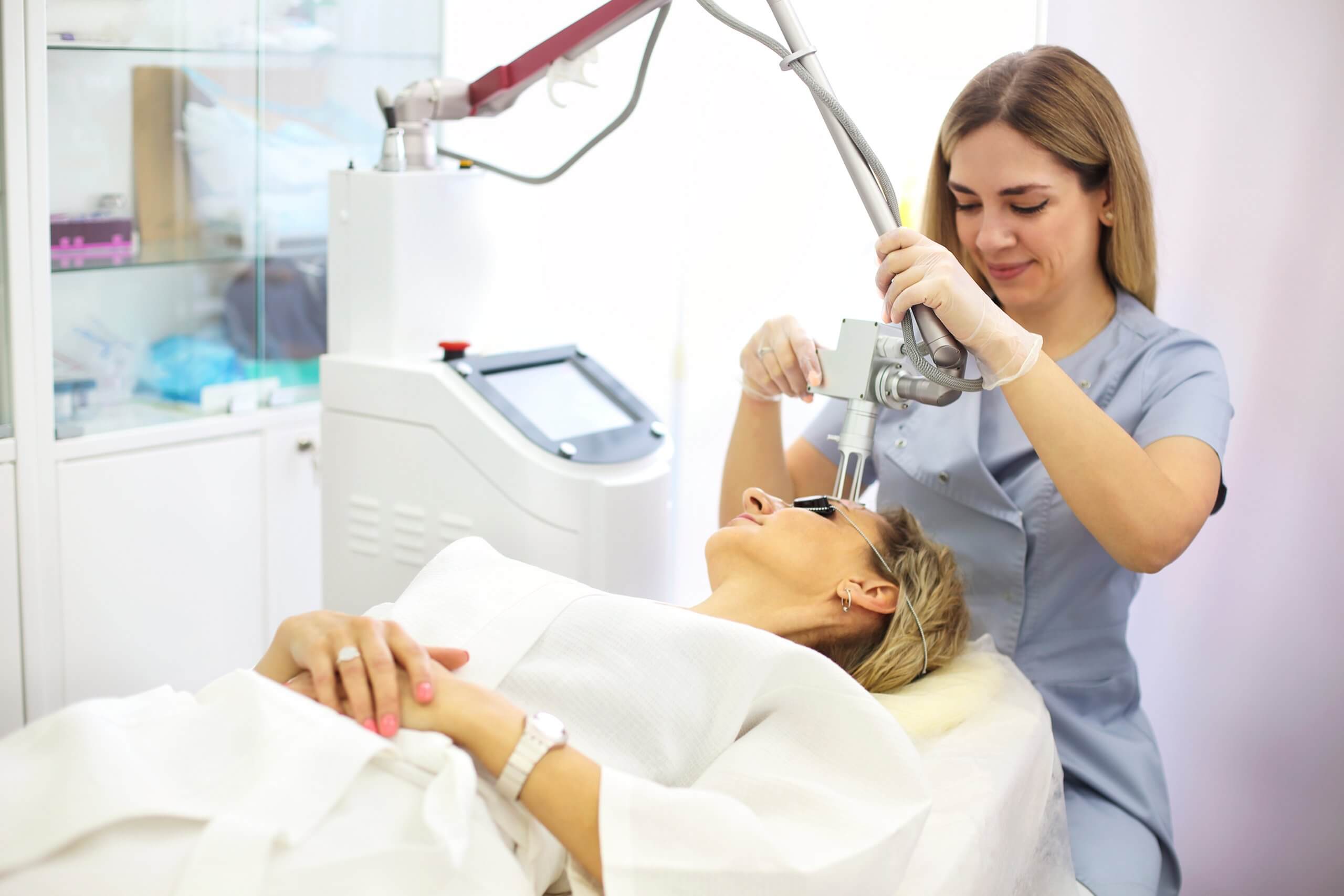 What Can I Learn as a Cosmetic Laser Technician

Next, Louis asks Hillary about her time spent taking cosmetic laser training courses at National Laser Institute. In response, Hillary talks about how she completely fell in love with the program. To explain, Hillary says how she remembers her instructors and staff fondly. In the following, Louis asks, “What was the best part of the experience during the program? What made you think that ‘Wow, maybe this could be for me.'” In response, Hillary states that “for me…it was when I got to do the hands-on clinical training…I just felt so natural and everybody that came in just really enjoyed being there.”

In the following, Louis asks a question he is faced with frequently with other people who want to get into cosmetics but are nervous about the science portion of the course. Moreover, he asks, “Do you feel you have to be as smart as you are to learn the science of how a laser works, or could anybody do it?” In response, Hillary states, “Anybody can do it.” In continuation of Louis’ previous query, he asks for Hillary to give him an example of some simple principle or concept of lasers that anybody can figure out.”

What to Know About Cosmetic Lasers

Hillary responds by saying, “Once you get it straight in your head, it’s not too hard to understand. The only difficult thing is when the energy leaves the machine, that part is not so bad.” In the following, Louis begins to ask Hillary about what she thinks is an important thing to know about lasers or laser safety. Moreover, Hillary responds, “Skin typing, 100%. What’s skin typing, being familiar with different skin types from light to dark and ethnicities and how that factors in.” Next, Louis asks if there is a difference between a light skin type versus a darker skin type. Hillary responds by saying that their treatments would be different because they would require different wavelengths from the laser devices.

After Hillary graduated from National Laser Institute and entered the medical aesthetics industry, she worked strictly in med spas. However, med spas are not the only places a cosmetic laser technician can work.

Where Can I Work as a Cosmetic Laser Technician

To continue, Louis asks about what kind of treatments Hillary performed as a cosmetic laser technician. In response, Hillary says that she was performing laser hair reduction, IPL Photofacials, Laser Vein Reduction, Profractional Laser Therapy, and Micro-Laser Peels. As well as that, Hillary replied that her favorite treatment to perform is an IPL Photofacial. Moreover, Hillary describes the machine as a great treatment because it makes your skin just feel fresh and smooth. In addition, IPL Photofacials can be performed, “once a month, forever,” states Hillary.

Hillary’s family continues to grow as she has her second child, a son. Hillary describes her son’s experience in his early years by saying, “It was not smooth sailing…he had a rough entry into the world and had four surgeries before he was even a year old.” Louis empathizes with Hillary, speaking about how it must have been a difficult time for her. Hillary says that the time was, “Emotional…that was probably the hardest time in my life.” In the following, Hillary states that her son is fine now and even has a soccer game on the weekend.

Louis continues to ask Hillary about her experience working at medspas and when she chose to shift gears from cosmetic lasers to the skincare industry. Moreover, Hillary states that she is the Arizona account manager for eltaMD. To learn more, Louis asks about eltaMD to discover Hillary’s workplace. With this in mind, Hillary states, “eltaMD, our claim to fame is that we are the number one dermatologist recommended sunscreen in the nation…we also have a post-procedure line and a skincare line as well.”

Next, Louis asks, “Do you go to doctor’s offices, a medspa, or who do you talk to?” In response, Hillary states, “I call on dermatologists, plastic surgeons…Arizona especially has a ton of medical spas…so I call on them too…and then I also have some other doctors and different specialties that are looking to increase some cash flow in their business…I’ve got cardiologists, I’ve got a bunch of family practice and OBGYNS.” Louis states,

“So a lot of people think they can get in this world as a cosmetic laser tech or injector and have to do that forever. You’re living proof that there are different avenues that you can go from skincare to all types of different things out there.”

Furthermore, Louis asks what Hillary’s favorite part of being in the skincare business is. In response, Hillary says, “I still love the training portion. I’m teaching people…I love teaching my offices about ingredients and also how to talk to their patients about it.”

“So you went from smart high school kid to mom to the office job you hated to, ‘I want to do something for myself.’ You like the aesthetic world, you stumbled into National Laser, you found your calling, you found your passion in lasers, aesthetics…Now you find something you want to do for the rest of your life…that is so awesome…cause some people to spend a lifetime in that office job.”

Hillary responds, “It was quite the leap too, to decide I was going to, after four years of education, bring on another student loan and make a decision to do that…I was terrified and with an infant, but it was the best decision I’ve ever made.” In continuation, Louis wonders, “For people out there considering your new career, maybe they are in your shoes in the past…they are doing a job and it’s just a job to pay the bills and they have got a passion, they want to try something new, but they are scared like you were. What advice would you give them?” Furthermore, Hillary says,

“I would tell them to do their homework, make sure that it is the right fit for them…but after that, I would say, just go for it, chase your passion. Just go for it because you would rather say, ‘Well, I tried that, I wish I would’ve done that.”

Did you know that if you are thinking about entering the beauty and medical aesthetic industry, the fastest way to grow your business is with social media? For example, you can use Instagram or Facebook to expand your clientele. Follow us at @asklouology and receive complimentary daily marketing tips and tricks to grow your business and soar on social media. Click here to contact National Laser Institute today!