In this edition of the Pursue Your Passion Podcast series, Louis meets with Jessica, a career changer, who took aesthetic laser training at National Laser Institute.

“Hey, I’m Louis the Laser Guy, and welcome to my podcast, ‘Pursue Your Passion.’ Join me on my journey as we discover how estheticians, nurses, physicians, and complete career changers are living their passion in this booming billion-dollar medical aesthetics industry.” – Louis Silberman, Founder, and CEO of National Laser Institute

Louis begins by asking Jessica what kind of jobs she was working at prior to her aesthetic laser training at National Laser Institute. Jessica responds that she was working, “some waitressing jobs…I feel like everyone does in their twenties, right?” As well as that, Jessica worked, “in a couple of studios…production studios, making radio, TV commercials…music studios…so doing audio productions.” To clarify, Louis asks, “So zero health and beauty background?” To confirm, Jessica says that she had zero health and beauty background prior to her aesthetic laser training. She was a complete career changer!

To follow, Louis asks, “What made you think of the wonderful world of medical aesthetics, cosmetic lasers…How did that pop into your mind?” In response, Jessica says thoughtfully that she had a Photofacial and found the experience amazing. Jessica continues, “I had this brand new face and then I was just…really, really interested in the aesthetics industry, but especially lasers…I just had questions upon questions.” 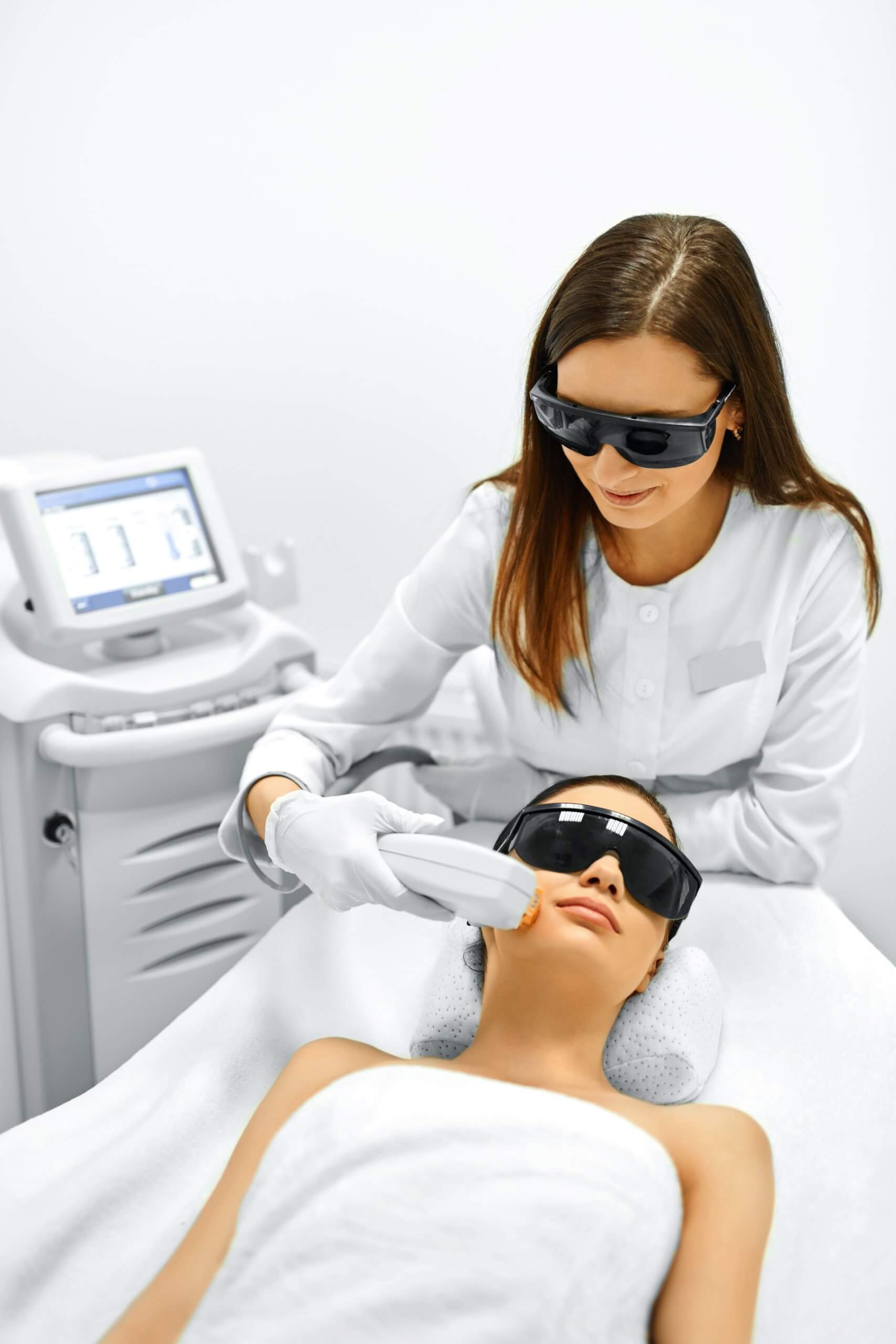 Curious, Louis asks, “Did she go to one of our classes?” To explain, Jessica says that she did not attend one of the courses National Laser Institute has and she, “just knows the reputation of National Laser Institute.” Louis excitedly responds, “That’s very cool. So then you googled us, asked some questions, and all of a sudden…I’m meeting up with you in Scottsdale, Arizona and we are saying hello, and you are learning lasers.”

To reply, Jessica says that she, “really has to give a lot of credit to the admissions advisor that I worked with.” Jessica goes on to say that the admissions representative was, “fantastic and she did a great job…we spent maybe two hours on the phone one day just becoming girlfriends and she gave me all the information that I needed…had a couple of follow up phone calls, but I was ready to pull the trigger right after the first, ten, fifteen minutes talking.

“before COVID happened, we used to do the five days of the classroom in person, and then we jumped right into clinicals…like 10 days of clinicals, and then Zoom happened and we took it all online.” Louis goes on to say, “We had so much feedback for people enjoying being online because they could be around their babies, their dogs, their boyfriends, their girlfriends, less travel time, less car time…We did focus groups and out of every hundred people we asked, ‘Would they prefer the classroom to be in person or online?’…cause of course we know the clinicals will always be in person, but 93% to be exact said, ‘I’d much rather do it on Zoom.”

Next, Louis asks how Jessica felt about her Zoom experience with aesthetic laser training. To describe her training experience, Jessica said, “It was a little overwhelming, just seeing all the people. I was like, ‘Whoa, this is it, this is no joke. Like this is the real deal.”

National Laser Institute provides aesthetic laser training with the top laser technicians and aesthetic nurses in the business. Jessica described one of her instructors as, “Unbelievable and really, really, thorough. She answered everyone’s questions and I feel like I really, really benefited. I was warned that the first three days were going to be a lot of information, and it was a lot to take in.” In addition, Jessica goes on to say, “I also knew that I was in really good hands, and anytime I had a question, I would just jot it down and towards the end, she would always answer it and to my full understanding.”

To continue, Louis remarks, “So you did the five days of classroom and I think you were flying from Boston to Scottsdale, Arizona. You have your day off, you are on the plane, and you are coming to Scottsdale, knowing that the next day, lasers will be in your hand. What were you thinking on the plane?” In response, Jessica says that she was studying on the plane and, “I was getting ready for the tests and everything else. I was reviewing the information, I was so excited.”

Next, Louis talks about how on day one of clinicals, you get to use a laser for the first time. Moreover, Louis asks, “How was that very first experience?” Jessica remarks that the client, “was more nervous than anybody else in the room, so it kind of took the pressure off of me…I provided the 1540 Fractional treatment: it was my favorite device we were trained on. To elaborate, Louis says, “Cool, for skin resurfacing.”

A World of Aesthetic Lasers

Next, Louis says that “so over the course of 10 days, you did laser skin rejuvenation, radiofrequency skin rejuvenation, laser tattoo removal, laser hair removal, some body contouring…I mean, the list goes on and on…the aggressive resurfacing lasers were your personal favorite out of everything?” To reply, Jessica says excitedly, “Yes, but I also had a blast with the tattoo removal as well, I did it on myself cause I had to know what it felt like and I had to do it firsthand.”

In continuation, Louis asks, “After two weeks of learning  in the classroom and doing zap, zap, zap, on customers and colleagues there, did you feel pretty comfortable with the device?” Jessica says assuredly, “Oh, absolutely! Yeah, a hundred percent! Almost spoiled by the amount of exposure that we got as far as having clients and being able to practice on ourselves.” Jessica goes on to say that her instructors were absolutely incredible and thorough in their teachings. As well as that, Jessica felt, “blessed that I was able to train there. I wouldn’t have gotten the same training from any other place.

A Passion for the Industry

Furthermore, Louis goes on to say that he has a favorite part of the medical aesthetics and cosmetic laser industry stating, “The one thing I like most about this industry, I’ve met over 20,000 people that have graduated from our classes. I’ve yet to meet one person who after the program has said, ‘You know what, I kind of changed my mind. I’m not feeling it like I thought I would,’ like everyone has talked like you, like, ‘This is cool, I’m digging this,’ which I love…it’s just such an easy business to be passionate about.”

To continue, Louis says, ‘So, I think the best part about this business is we can be friends and buddies with our customers, and so it makes it…not a job, it just makes it a lifestyle or we can make money at the same time.

To finish up, Louis asks, “So the next step is to go out there and look for a job that says your plan. If you want to work at a medspa, a doctor’s office, anywhere to get experience…where is your mind going?” In response, Jessica says that she wants to get as much experience at as many places as possible, then, she continues,

“I want to take all of that experience and put it into my own place…a five-year plan and I already have a business proposal kind of set up and I have a little notebook of all these ideas of things I like and things I don’t like…I just want to take it all in, because I want to do it right…I want that to be my life.”

Moreover, are you interested in joining the medical aesthetics industry through cosmetic laser training? Alternatively, are you a medical professional who is seeking to add to your skillset with Botox or filler training? At National Laser Institute, you are trained on the most up-to-date techniques and technologies in the business. As well as that, you will be satisfied with the level of knowledge and skills you will have leaving the program. In addition, National Laser Institute will give you the confidence you need to succeed in the medical aesthetics industry. Click here to contact one of our superstar admissions team.

If you are considering joining the medical aesthetics industry, one of the quickest ways to grow your business and brand is through the use of social media. For example, you can use Instagram or Facebook to expand your clientele. If you are interested in more tips and tricks to expand your business and succeed in the medical aesthetics marketplace, follow National Laser Institute’s founder and CEO, Louis Silberman, at @asklouology.