In the podcast series, “Pursue Your Passion,” Louis Silberman, founder, and CEO of the National Laser Institute, interviews aestheticians, nurses, physicians, and complete career changers that are living out their dreams. In this podcast edition, Louis joins in with Katie, a Registered Nurse (RN), turned Nurse Practitioner (NP), and cosmetic injector who landed her dream job after studying at the National Laser Institute.

“Hey, I’m Louis the Laser Guy, and welcome to my podcast, ‘Pursue Your Passion.’ Join me on my journey as we discover how aestheticians, nurses, physicians, and complete career changers are living their passion in this booming billion-dollar medical aesthetics industry.”

Before Becoming a Cosmetic Injector

Louis welcomes Katie to the podcast and reflects on her graduation from the National Laser Institute back in 2015. Katie happily responds, “Yup, I’m coming up right on that six-year anniversary.” Katie was a Registered Nurse when she started her cosmetic injector training and announces that she has become a Nurse Practitioner since then. “You’ve evolved since we met, congratulations!” exclaims Louis.

In continuation, Louis asks what type of nursing Katie was doing as an RN before she attended the cosmetic injection training program. In response, Katie says that she was working in a Pediatric Intensive Care Unit (PICU) as a nurse for close to 3 years in Arizona. However, Katie knew she was interested in medical aesthetics and that she would end up in the business. Katie went on to explain that she would see patients anywhere from newborns all the way up to patients that are seventeen or eighteen years old. Moreover, Louis follows by asking Katie,

“So what made you kind of wake up one day and say, ‘Hey, you know what, that cosmetic injecting thing looks kind of interesting. Botox looks intriguing. I’m going to check this out?'”

Katie replies that she was, “actually thinking about it a little bit in nursing school. Okay, I think that’s most peoples’ route…I have a family friend, she is a nurse who spends time with my parents, who own a successful aesthetic practice in my hometown in Colorado…So I always kind of saw it and thought maybe that would be something I would be interested in someday, but I wanted to get some kind of real-world nursing experience…Then I was just looking for a way to get my foot in the door.” 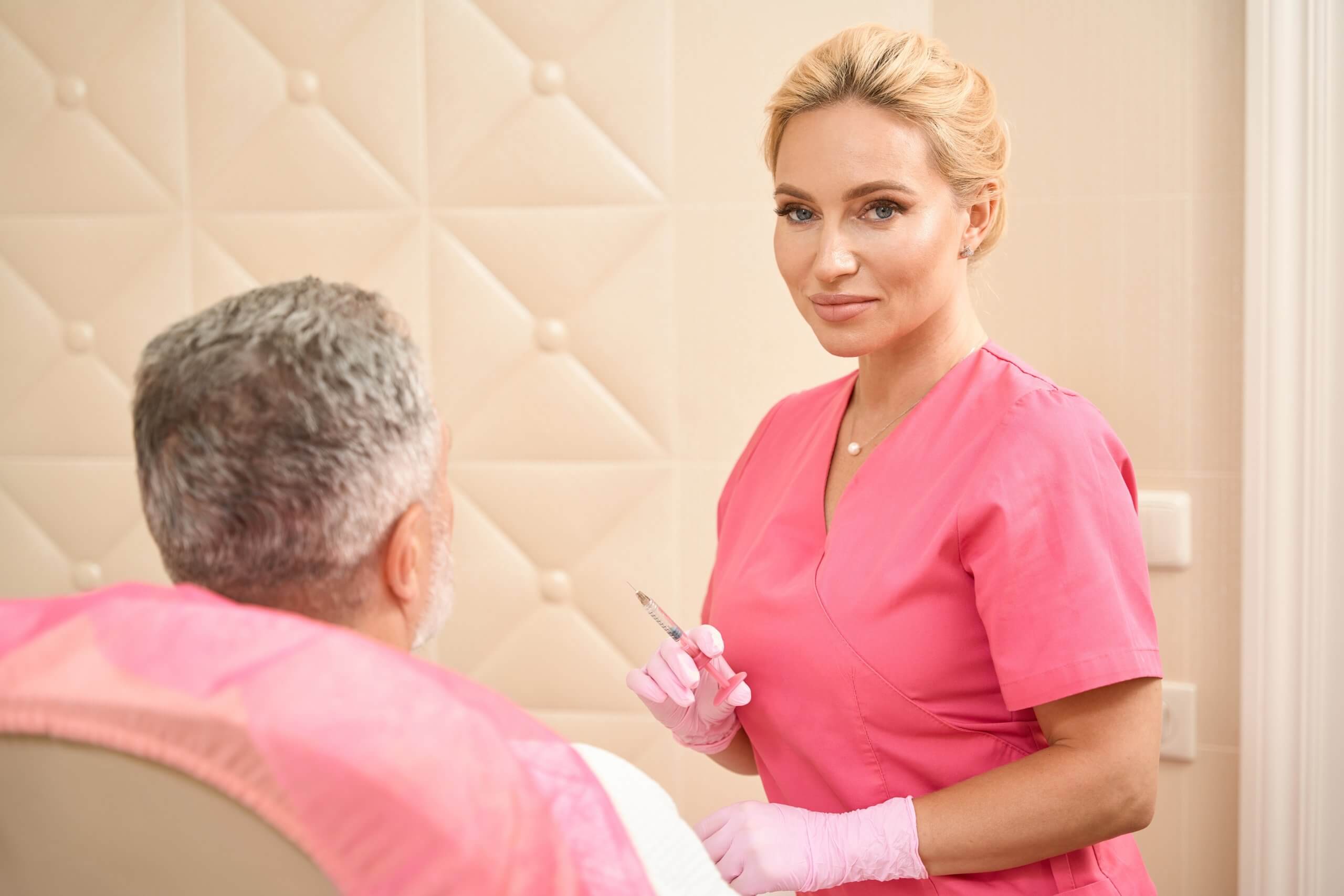 To clarify, Louis asks about what courses Katie had taken while at National Laser Institute. In response, Katie replies,

“I remember going into it, extremely excited, I didn’t really have a whole lot of, you know, background in it, or information. It was all like a brand new world to me and I felt like I learned so much in those four days. It was crazy, it kind of solidified my interest in it and my dedication to pursuing that as a career. I just thought it was an overall amazing experience.”

In addition, Katie says, “It was kind of like that final deciding factor that once I got to actually get hands-on and do it. I was like, yep, this is it!” Louis jokes he is, “going to rename this podcast ‘Epiphany of a Nurse.'”

To continue, Louis asks, “So, have you been injecting part-time, full-time, for the last five or six years…How long did it take you when you left National Laser Institute, did you dabble? Did you jump right into a job? Did it take you six months? What was the path after National Laser Institute.” In response, Katie says that “It took me a little bit to get my first position. I kind of applied to everything that I could find. It took me a little bit of time to find someone willing to take me on and train me…after that, I was just, you know, full-time into it. For the last five years, I’ve been full-time.”

Working as a Cosmetic Injector

Furthermore, Louis continues by asking Katie if she works for someone else or if she owns her own spa. Katies replies, “I worked for a couple of people. I worked for a practice with a good friend of mine. So kind of a little bit of everything and then getting ready to open my own practice all by myself.” With this in mind, Louis says, “I’m going to make the assumption that you’re doing neurotoxins and dermal fillers, maybe some PRP, platelet-rich-plasma…Are you doing any Kybella?” Louis learns that Katie is performing a lot of Kybella treatments.

In addition, Louis remarks, “Okay. So you are doing injections, the double chin…I heard they are about to get the FDA approved for every single body part pretty soon. Are you doing any sclerotherapy or any injections for the veins and legs?” Katie responds that she used to assist in those treatments with the dermatologist she had previously worked with, however, is not yet performing those treatments herself. Joyfully, Louis adds that it is his new favorite procedure in the world. In fact, Louis will be receiving this treatment soon!

Kybella is an FDA-approved drug that dissolves fatty tissue in the lower face and chin, commonly known as a “double chin.” Important to note, Kybella is an alternative to getting rid of a “double chin,” so patients can avoid invasive and painful plastic surgery.

To further explain, platelet-rich plasma, PRP, injections are made with your own body’s platelets. This, in turn, gets rid of scars, and sun damage, and lessens the appearance of wrinkles.

To clarify, sclerotherapy is a safe and effective treatment used to diminish spider veins. As well as that, it requires no anesthesia, hospitalization, or incisions. The treatment starts with an injection of a saline-based solution mixed with a medication that helps to collapse/cauterize the spider veins. In turn, this irritates the lining of the blood vessel to collapse the spider vein. Once performed, the blood vessel is absorbed back into the body’s bloodstream and you can see it disappear.

In continuation, Louis says that so, “starting your own practice, does that look like renting one teeny room in an office or getting a 2000 square foot space?” Following this, Katie responds that she is, “getting ready to move back to Arizona…that’s kind of where my family is…So in the beginning, it will be just me renting a smaller space…Hopefully for that first year and then definitely looking to grow and expand.”

Louis adds cheerfully, “Well, it is awesome to catch up with you and it is awesome to see you are pursuing your passions and doing something that intrigued you and following your dreams…It’s hard to take a risk…even if it’s hard, like moving to a new state, falling in love, or having a baby. All of those things are scary, but then when we do it and it’s like, ‘Wow, I am so happy I did that.'”

With this in mind, Louis tells Katie to,

“Pat yourself on the back, it’s awesome that you believed in yourself and took that step and you worked for other people, got great experience, and are now starting your own gig. ” Louis continues by saying, “I love hearing these stories out there and you are going to kick butt. I mean, I’ve got nurse injectors that make hundreds and hundreds, I mean three, $400,000 a year at their own practice. You guys are making as much as some…plastic surgeons I know…It is a side benefit to know that if a typical nurse in the hospital makes sixty to eighty grand and a typical Nurse Practitioner in the United States makes a hundred grand a year, a cosmetic injector working Monday through Friday, 9:00 AM-5:00 PM, can make hundreds of thousands of dollars a year once they get established and mature.”

On the topic of social connections, Louis asks, “I’m sure you are friends with some of your patients, right?” Katie happily responds, “Absolutely, the connections you make with people are amazing.” In addition, Louis asks, “Have you ever had a coffee, or a drink, or lunch with a patient before?” In response, Katie replies that she has had an outing with a patient before.

In comparison, Louis says, “I bet you never did that in the hospital…It’s a whole different ball game. A lot of doctors and nurses can’t get over the fact that we kind of…ride that line of professional and personal relationship, but, you almost have to like, I’m sure you’re probably friends with your hairstylist. It’s almost that kind of relationship, you know.”

Moreover, Katie responds by clarifying that, “It’s a different opportunity to kind of make those…closer relationships with people.” To wrap up, Louis asks what Katie’s favorite treatment to perform on somebody or herself is. Katie responds by saying, “Well, in general, I would say my favorite thing to do to anyone else is…filler…I love seeing people for other things, but injecting filler is definitely more instant gratification for me as the injector to be able to create those transformations and see them right then and there.” In addition, Katie’s favorite treatment to perform on herself is Botox. With this in mind, Katie performs Botox injections on herself every three months, “on the dot.”

“Did you know that if you are thinking about entering the beauty and medical aesthetic industry, the fastest way to grow your business is with social media? For example, you can use Instagram or Facebook to expand your clientele. Follow us at @asklouology and receive complimentary daily marketing tips and tricks to grow your business and soar on social media.”- Louis the Laser Guy