While high costs of fuel and groceries may make for an ugly economic outlook, people are increasingly turning to cosmetic treatments to face harsh times with a fresh look.

The procedures are part of a fast-growing industry that earned more than $8.5 billion last year, said Louis Silberman, founder and president of National Laser Institute, a non-surgical medical aesthetics educator based in Scottsdale.

“The reality is that people will always pay to look good,” Silberman said. “People are concerned about anti-aging. The customer is still finding a way to go out and spend those extra dollars to look good.”

Despite the sluggish economy, the number of cosmetic procedures has grown nationwide to 11.7 million in 2007, according to the American Society for Aesthetic Plastic Surgery.

Including laser surgeries and Botox injections, the number of non-surgical cosmetic treatments has grown 854 percent since 1997, the group says, from more than 1.1 million a decade ago to more than 9.6 million annually.

The growing customer base combined with the increasing jobless rate has many seeking a career in the aesthetic cosmetic industry, Silberman said.

Thousands of cosmetic laser technicians have graduated courses offered by the National Laser Institute since it opened in 2003, Silberman said. The company now has offices in Las Vegas, he said, and is planning an expansion within two years to Dallas, San Francisco, Chicago, New York and Toronto, Canada.

About 97 percent of students are women, many of whom are stay-at-home moms or just interested in a career change, Silberman said. Men will undergo the treatments, but aren’t as eager for a career in the industry.

“A lot of people that come here are what I call career-change individuals,” he said. “They come from a totally different career, they don’t come from an aesthetics or medical background and they want to pursue the health and beauty industry.”

Each procedure has remained popular with customers willing to cut back on spending, but not on trying to stop signs of aging.

Among the top five non-surgical cosmetic procedures in 2007 were laser hair removal with 1.4 million, and laser skin resurfacing and rejuvenation with 647,000, according to the American Society for Aesthetic Plastic Surgery.

The most popular course at National Laser Institute is in laser hair removal – a treatment where a beam of light enters the skin, targets and heats the hair’s melanin, which prevents it from re-growing. Depending on the area, the procedure can take up to 2 hours and can require ongoing visits.

Another fast-growing field is laser skin resurfacing, where the beam of light is used to remove blemishes and other unwanted marks.

But as the popularity of the industry continues to grow, as does the educational options for those interested in entering the aesthetic and cosmetic medical field, Silberman said.

“There definitely competitive schools out there, which I love,” he said. “Every time a competitor opens they market to the public . . . (the public) ends up going to the best place with the best reputation, so they basically end up coming here. Sometimes competition is a good thing.” 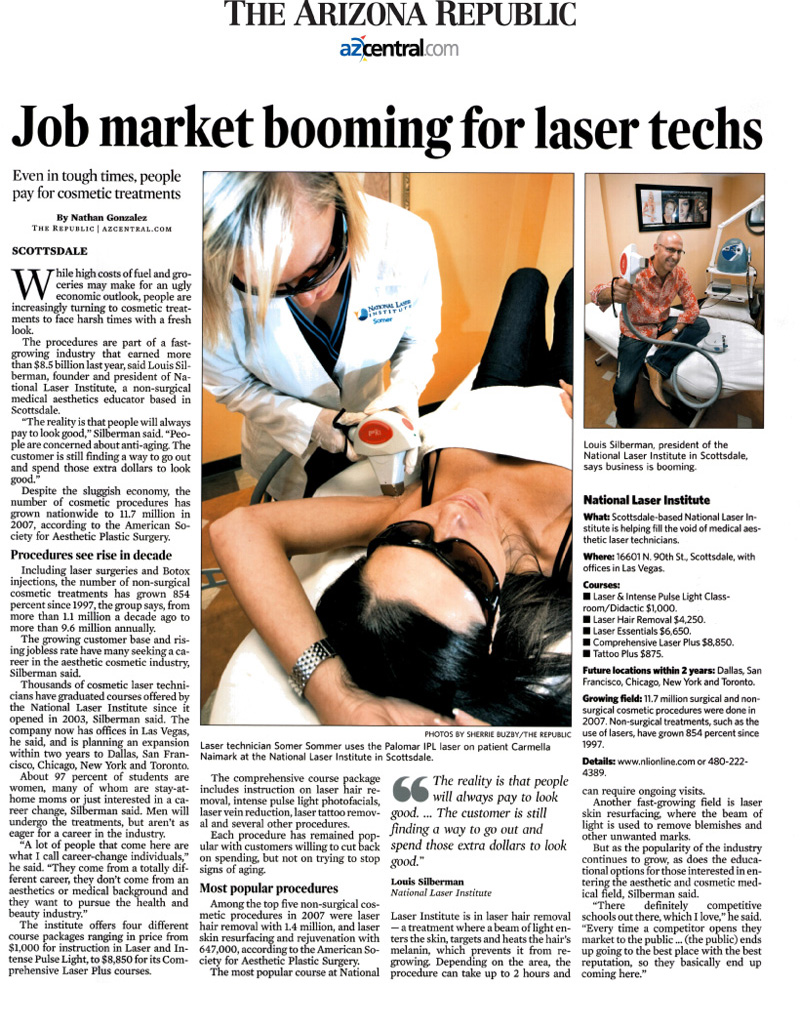