Shelley Cook, is a Certified Laser Technician who specializes in laser tattoo removal and is also an instructor at National Laser Institute, met Amanda in 2008 on a tattoo removal appointment. At the time, Amanda was a nurse working in the Intensive Care Unit at Mayo Clinic Hospital in Arizona. Shelley introduced Amanda to Louis Silberman, CEO of National Laser Institute, and they became fast friends. Amanda always had a passion for cosmetic treatments as a consumer. After her conversations with Louis she got excited about the burgeoning business opportunities in cosmetic medicine and looked into cosmetic injection training at National Laser Institute. 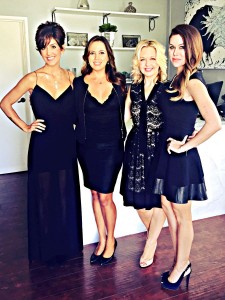 Amanda took our 4 Days of Cosmetic Injectable Training consisting of Botox, dermal fillers, advanced injections and Sclerotherapy and got her certificate. Upon completion, Amanda moved to California to go to Kaiser School of Anesthesia in 2009. Amanda continued to practice cosmetic injections on friends and family to earn extra income on the side. She was half way through the 2-year program and was at the top of her class with a 4.0 average, but Amanda was feeling ill-at-ease, spending so little time with her daughter. One evening Amanda’s daughter asked if she could “just be a nurse” and Amanda found herself re-thinking her commitment to becoming an anesthetic nurse.

Amanda did not want to punch a time clock for the rest of her life. She also wanted freedom, and she would have limited flexibility working at a hospital. Becoming an anesthetic nurse would also limited her geographically. She would need to relocate to a more rural area to make more income, but she wanted to stay in L.A. After a sleepless night, Amanda found herself questioning why she was even going to school to become an anesthetic nurse in the first place. Amanda didn’t want to look back one day and say if she had to do it all over again she’d do it differently.

The next morning Amanda realized cosmetic medicine was her passion.  She said yes to her daughter, called Kaiser School of Anesthesia that she was not going to be completing the program, and she called Louis.

Her family was disappointed at first because graduating from Kaiser would have guaranteed Amanda a 6 figure income.  But changing course to follow her passion to use her cosmetic Botox and dermal filler injection training was a risk she was willing to take.  Switching to cosmetic medicine was a lifestyle choice.  Amanda knew if she was passionate, persevered and had a point of difference, she could be as successful as a nurse anesthetist by becoming what she truly loved: a medical aesthetician injection specialist.

Amanda believed in herself and in the injection training she had received at National Laser Institute and worked in a few med spas and learned the ropes.  The more experience Amanda  got under her belt, the more sought after and successful she became. Highly skilled injectable nurses are in high demand because they are hard to find.  After persevering, Amanda’s cosmetic injection training finally paid off.

Amanda’s journey evolved to opening up her own business, ModernArt Medspa and Salon in Redondo Beach, California. Amanda explains, “Injectables is an art.  When you get good at injectables word spreads quickly. Clients are loyal and they will follow you anywhere.” Amanda has clients from Tahiti that see her twice a year, Croatia, Africa and east coast USA.  She also teaches destination courses for National Laser Institute in Beverly Hills, San Francisco, and Newport Beach.

Amanda has seen the beauty and medical aesthetics industries from both sides and recognized a disconnect between what practitioners can do and what clients want to do.  She says, “we are the only full-service med spa salon in South Bay.  Combining med spa services in a salon environment is a new business model. The majority of my clients do not want plastic surgery, what they want is more cosmetic. They are comfortable with receiving med spa services in a less clinical beauty salon setting.”

We asked Amanda what her biggest takeaway from National Laser Institute is.  She replied, “Getting the foundational knowledge with science and pharmacology behind it was big for me.  It’s the stuff you don’t get on the job. It was also great to have hands on at NLI – that’s the most valuable part.  Don’t just get a safe job. Keep doing it. Don’t just put this certificate in your back pocket for later. Get a job and practice your craft.”

Amanda holds degrees from the University of California, Berkeley and Arizona State University. She is a proud graduate of National Laser Institute and her cosmetic injectable training is on-going.  Amanda holds numerous certifications in advanced injection techniques and aesthetic procedures. She has worked and trained alongside renowned plastic surgeons in the LA area and she currently serves as an adjunct clinical instructor for the National Laser Institute.

If you would like to follow your dream and have a career in cosmetic medicine, cosmetic injection training classes are offered every month at National Laser Institute.  Click here to view the schedule.

For more details on our 4-day cosmetic injectable training course, please give us a call at 800-982-6817 or fill out our form on the right.