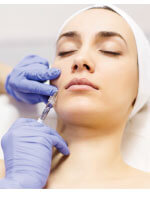 While traditional aesthetics treatments will always be popular because of how they make people feel, it is difficult for those types of treatments to compete with procedures using technology to literally make a sun spot or spider vein disappear right before the client’s eyes. And, thanks in large part to many celebrities’ willingness to share their medical aesthetics procedures with followers on social media networks, “getting something done” is no longer considered something to be embarrassed about – the opposite is now true; it has become mainstream for people to show off what they have had done. Most of today’s procedures are primarily non-surgical and technology- and injection-focused – they do not involve weeks of recovery time, as is typically required by plastic surgery.

Aesthetics VERSUS Medical Aesthetics
There remains some confusion, however, regarding which procedures typically fall under the aesthetics category versus those that are considered medically aesthetic or surgical. Nicole McCarty, a medical aesthetician with eight years of experience working for a plastic surgery/medical spa facility states, “Most people know that aesthetics includes services such as facials, peels, microdermabrasion, waxing, threading, and body wraps. Medical aesthetics, on the other hand, takes aesthetics to the next level; treatments tend to be more aggressive and include some form of technology or other forms of medical advances, but does not include cutting the skin as cosmetic surgery does – so, it would not include procedures such as traditional liposuction.”

Levels of Medical Aesthetics
Medical aesthetics includes both injectables (such as Botox, dermal fillers, and Kybella) and technology – the latter of which falls into non-laser and laser. 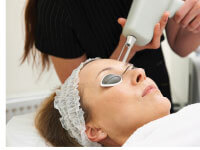 Injectables
Botox is used to treat the appearance of forehead lines, crow’s feet, and frown lines by temporarily blocking signals to injected nerves so that the muscle cannot contract; in turn, the wrinkles relax. Botox can also be used to reduce excessive sweating (hyperhidrosis), give the upper lip a slight lift, correct a droopy nose, lift the eyebrows, and minimize protruding neck cords. Scientists are continually finding new cosmetic and medical uses for Botox.

Dermal fillers are typically made with hyaluronic acid, a substance found naturally in the body, and are injected into areas where volume and/or contouring is desired. In recent years, manufacturers have worked diligently to perfect the thickness and malleability of dermal fillers so that experienced injectors can provide clients with long-lasting, yet natural-looking results. Some areas of the face look better with a thicker filler, while other areas need a thinner product.

One of the newest and most popular injectables for moderate-to-severe submental (chin) fat is Kybella. Until fairly recently, double chins could only be treated successfully with liposuction and, in most cases, additional surgical skin tightening. Kybella is a non-human/non-animal formulation of deoxycholic acid, a naturally-occurring molecule in the body that aids in the breakdown and absorption of dietary fat. When injected into subcutaneous fat, Kybella causes the destruction of fat cells and, once destroyed, those cells cannot store or accumulate fat. Kybella is non-surgical and minimally invasive; dissolves fat in the stubborn, under chin area; and firms and tones the skin and jaw line. Results are long-lasting and may even be permanent.

Non-Laser Treatments
Less aggressive, non-laser treatments are very popular because they include little or no downtime, though they typically require more treatments. Examples of less aggressive, non-laser treatments include radio and high frequency technology to treat a variety of skin concerns including blemishes, surface irregularities, skin tags, clogged pores, and milia; hydradermabrasion, which cleanses, exfoliates, extracts impurities, and hydrates in one treatment, infusing serums into the skin; and microcurrent, a low-level current that is said to mimic the body’s natural current and has been reported to contour, tone, and firm aging skin.

Laser Treatments
As far as laser technology in medical aesthetics goes, there are a variety of different lasers, but the most popular are fractional non-ablative lasers; fractional ablative lasers; fully ablative lasers, such as CO2 and erbium; and other lasers used for both skin rejuvenation and hair removal, such as 1064 and 755 wavelengths. Lasers with infrared wavelength ranges rejuvenate skin by cooling the epidermis, allowing for laser energy and heat-reduced injury to the dermis without ablating the epidermal layer. 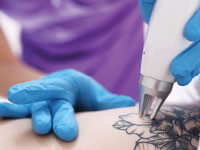 The type of laser used depends on the client’s skin and desired outcome. Gentle, non-ablative lasers and IPL can be used to treat brown and red spots and other irregularities, but for deep sun damage and wrinkles, a more aggressive laser would be needed. The general rule of thumb for lasers is: the more aggressive the laser is, the better the result, but the longer the downtime. Fractional non-ablative lasers typically require four-to-five treatments for optimal results, but have only one-to-two days of redness; normal activities can be quickly resumed. Fractional ablative lasers go deeper, requiring only one-to-two treatments with about one week of healing time. The most aggressive lasers – those that are fully ablative – require only one treatment, but will need two-to-three weeks of healing time.

There are additional medical aesthetics treatments that have been around for a while and remain popular, such as laser hair removal, laser tattoo removal, laser vein reduction, and sclerotherapy for spider veins, as well as a growing demand for newer technologies and advances, such as non-surgical body contouring using energy-based ultrasound and cooling technology and treatments involving the use of the client’s own platelet-rich plasma to help grow collagen.

The Future is Now
Using technology as a driving factor, medical aesthetics is constantly evolving and improving. So much has changed in medical aesthetics since it first exploded onto the scene and one of the newer types of treatments that is already in high demand is non-surgical body contouring. Aestheticians are seeing manufacturers address this modality using energy, heat, lasers, radio frequency, and mechanical massage. The biggest rage uses a device placing unwanted fatty areas between two cooling plates, thereby targeting and freezing stubborn areas that have been resistant to weight loss. This procedure actually reduces the number of fat cells in treated areas by about 20 to 25 percent with long-term results and little-or-no downtime, giving it a tremendous advantage over surgical procedures such as liposuction. Non-surgical body contouring is poised for continued significant growth over the next few years.

Platelet-rich plasma is another growing treatment area that has been very exciting to watch. While some may believe platelet-rich plasma is a cutting-edge therapy, it has been used for many years in sports, orthopedic medicine, reconstructive surgery, and dentistry. More recently, scientists have begun realizing its vast usefulness in facial rejuvenation, dermatology, skin wound healing, feminine rejuvenation, and even hair re-growth.

Platelet-rich plasma is something that occurs naturally within the body. A small amount of blood is drawn from the client, placed in a sterile tube, then spun in a centrifuge, thereby separating white and red cells from platelets and plasma, making it platelet-rich. When the concentrated platelets are injected into soft tissue, numerous growth factors and/or cytokines are released, causing cellular growth.

Platelet-rich plasma injections typically take less than 30 minutes and are relatively painless. There may be some mild swelling, redness, and bruising, which typically dissipate in one-to-three days. Furthermore, there is virtually no risk of side effects since platelet-rich plasma is made from the client’s own cells.

Platelet-rich plasma is also being used with microneedling, a process where a minimally invasive pen-shaped device studded with several very fine needles is passed over the treatment area, breaking down old tissue and causing deliberate minor injury to the skin’s surface, thereby stimulating the healing process. At the same time, the client’s platelet-rich plasma is topically applied to the skin. Over time, new collagen is produced and the result is younger, healthier, more beautiful-looking skin. This treatment has been named the “vampire facial” by the doctor who trademarked it. 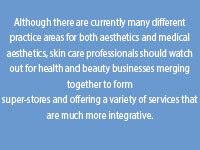 THE FUTURE OF MEDICAL AESTHETICS
Technology and medicine are currently running at warp speed to produce the most effective treatments possible, while at the same time improving client comfort levels during treatment, reducing downtime, and increasing affordability based on robust marketplace competition.

Although there are currently many different practice areas for both aesthetics and medical aesthetics, skin care professionals should watch out for health and beauty businesses merging together to form super-stores and offering a variety of services that are much more integrative. A similar example is Walmart. Most people do not know that the discount mega-store started out in 1962 as, more or less, a five and dime. Its owner’s focus was on selling lower-priced items at a lower margin to ultimately achieve high volume sales. But, over the years, it has transformed into anything but a lowly discount shop. Today, people can go to Walmart to get their eyes checked at an optical shop, their tires rotated, order a pizza, and stop in for a manicure and pedicure.

Professionals should look for the same concept in medical aesthetics. Instead of separate facilities, such as a day spa where clients can get a facial, a nail salon down the road, and, on the other side of town, a medical spa for Botox, they will be able to get everything they want under one roof, including cosmetic injections, cosmetic lasers, yoga for exercise or stress relief, massage, chiropractic care, naturopathic physicians, body wraps, eyelash extensions, permanent makeup, Pilates, and plastic surgery. Maybe, in some facilities, there can be a smoothie bar, daycare for the kids, and a fitness center. These mega-spas might get up to 50,000 square feet. Everything will come together to provide the client with a full array of services at maximum convenience.